Both Pedro Martinez and Sebastian Korda can finally show themselves to a wider audience at this year's French Open. While I was anticipating that for the 23-year-old Spaniard for quite some time, Korda's recent clay run surprised me a bit. The American youngster only turned 20 in July and competed in his first Grand Slam main draw at the US Open, pushing Denis Shapovalov to four sets. This week, the son of Petr Korda, who reached the final here at Roland Garros in 1992, beat Andreas Seppi and John Isner both in four sets after crushing through qualifying without losing a set against Krueger, Schnur and Karatsev.

While this is a rather impressive run, his Spanish opponent was able to produce the same. After struggling a bit in his first qualifying round against Masur, Martinez blasted through both qualifying and the main draw, where he beat Aleksandar Vukic and Mikhail Kukushkin. In these two matches, he only lost 13 games and concluded both with a third set bagel. I feel that he's finally on top of his game and his mind is in the right place. While that could be said about Korda as well, he's three years younger and might still be inconsistent at times on such an unfamiliar deep clay run. Korda also struggled with his lower back a bit and had to take a medical timeout at the start of the fourth set against Isner. In that particular match, he didn't have to fight through rallies as much as he will need to today and obviously a match against Isner is always a bit different. 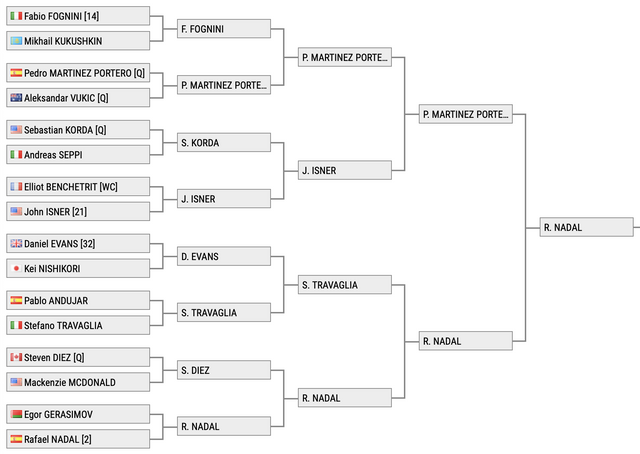 I was asked about the little brackets I included in the women's outright preview, and I just completely forgot about them for the men's. As you can see, I already had high hopes for Martinez when the tournament started. He arrived in Paris after a good run in Rome, where he made it through qualies and beat Querrey in straight sets before losing to semifinalist Shapovalov.

No doubt, this third round encounter is the biggest match in both Martinez' and Korda's young careers. It's their first ever showing at Roland Garros and the chance to make it to the second week is huge. On top of that, it would most likely be Rafael Nadal waiting in the next round. All things considered, I think that Martinez is the rightful favorite in this match. He's playing some consistent clay court tennis on a high level and I would be a bit concerned about the lower back issue as a Korda backer. Therefore, my bet is on Martinez -1.5 sets, currently available at -122 with the Betfair sportsbook. If you have SBOBet available, they even offer -105 odds on that outcome.

Bet here
New customers only. Bet $1 $ Get $200 in Free Bets! No matter if your bet win or loses. T&Cs apply. Time limits and T&Cs apply. *or currency equivalent

Bet here
18+ Claim from the deposit menu before completing first deposit (min. €20), within 14 days from registration. Bonus can only be used in the sportsbook. Max bonus €50. The deposit and bonus needs to be wagered 4 times with min. odds 1.80 within 60 days before a withdrawal can be made. Only players from Germany, Denmark, Austria, Malta, Brazil, Chile, Ireland, Iceland, Luxembourg, Nigeria, New Zealand and Peru. T&Cs apply.

Motorsport.com,
Formula 1
All betting tips
Account
Or connect through