A new Bundesliga season!
Bratwurst & Bayern Munich - can Dortmund challenge?
Odds on Serie A
Ronaldo, Zlatan, Conte, Lukaku... so many big names, so many odds!
La Liga starts again
Messi stays and Barcas odds remain low - check them out yourself!

Leeds United, West Bromwich Albion and Fulham were promoted from the Championship and replace the relegated trio of Bournemouth, Watford and Norwich City.

How can I find the best Premier League odds?

Will fans be allowed in stadiums for the 2020-21 Premier League?

There's a plan in place for allowing fans back to the stadiums. A limited number of spectators will be allowed from October 1, 2020.

Who are the favourites to win the Premier League?

Manchester City and Liverpool are pretty much joint favourites to claiming the league title. Manchester United and Chelsea are favourites to securing the other top 4 spots.

The bookmakers are quite unanimous in their verdict: Pep Guardiola's Manchester City are favourites with Jürgen Klopp's Liverpool close behind. Frank Lampard's Chelsea and Ole Gunnar Solskjær's Manchester United are front runners for the remaining two Champions League spots.

Be sure to keep track of the season at our Premier League stats page. Current odds are compiled and available at our odds comparison page and betting tips and predictions are found at our betting tips page.

These odds have been compiled from betting sites bet365, Betfair, Bethard, Unibet and William Hill - for all of which we offer competitive bonuses at ThePlayer.com.

Read on for assessments of every Premier League team and a few outright betting tips (bets placed on the total outcome of a season or competition). 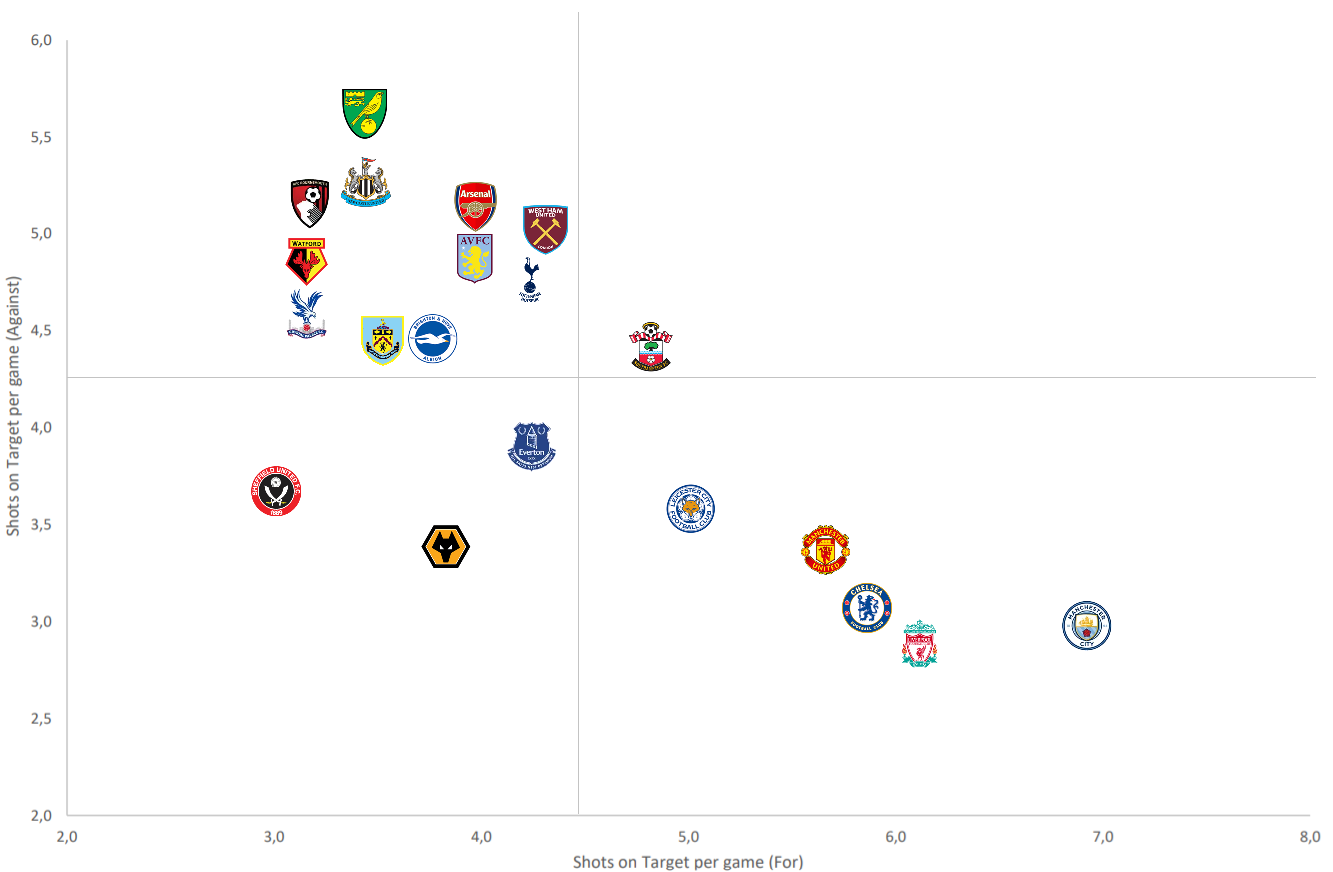 With this as a rough starting point, let's have a look at how the teams have transformed and reshuffled during the summer and how it might affect the outcome of the 2020-21 Premier League:

Top of the table

Pep Guardiola's team failed to claim a third consecutive league title, but Manchester City did in fact create the most shots per game and conceded the fewest shots per game in during the 2019-20 Premier League.

They have lost one of their best midfielders David Silva but I'm pretty sure that the void will be filled by either Bernardo Silva or perhaps more likely youngster Phil Foden.
Manchester City have bought the Dutch international defender Nathan Aké from Bournemouth and creative defender Angeliño is returning from a bonzer loan spell at RasenBallsport Leipzig.

The Citizens have all the characteristic of a title challenger and I believe that the league title will return to Manchester after a rather close race.

The club have parted ways with faithful, but sporadically deployed, servants Dejan Lovren and Adam Lallana.
Liverpool have grabbed Konstantinos Tsimikas from Olympiakos, as a backup for defender Andrew Robertson I recon.

The Reds also possess all the qualities of a title contender but I believe that will have to settle fro second spot after a tight race.

Frank Lampard did a superb job in his first season in charge. Chelsea created the third most shots on target and only Manchester City and Liverpool conceded fewer shots on target.

The Blues have strengthened the squad both defensively and attacking wise. If they can improve the goalkeeping performance, they might even challenge the Citizens and the Reds for a top 2 spot. Anyhow, anything less than a top 3 spot would be a disappointment.

The squad turned a corner when Brendan Rodgers took over the reins in early 2019. For the second part of the 2018-19 season and for most part of the 2019-20 season the stats looked really great.

Lost defender Ben Chilwell to Chelsea. However, when the club sold Harry Maguire to Manchester United in 2018 they had Çaglar Söyüncü ready as the successor and I'm sure the loss of Chilwell has been planned in a similar way (Leicester have the English U19 international Luke Thomas who started the final games of last season and also played during pre-season this summer).

The Foxes finished last season on a terrible points-per-game run and a Champions League spot slipped through their fingers. However, the stats looked good throughout the season and I believe quite a few people will underestimate Leicester.

Securing a Champions League spot last season was rather well-deserved, the Red Devils being one of the best performing teams in the end.

I think Southampton is transforming into a peculiar entity. As a team they performed better as last season went by and in the final stages the south coast detachments points-per-game were only bettered by Liverpool, Tottenham, Manchester United and Manchester City.

Have sold midfielder Pierre-Emile Højbjerg to Tottenham. Used Oriol Romeu and James Ward-Prowse in central midfield though after the covid break.
Obtained defender Kyle Walker-Peters from Tottenham as an upgrade to Cédric Soares who left for Arsenal.
Have also acquired defender Mohammed Salisu, one of Valladolid's best players last season.

The Saints are enjoying an upward trend and in the second part of last season, Ralph Hasenhüttl's game seemed to settle. If Southampton can build on this, I believe they will spring a surprise or two in the 2020-21 Premier League.

Wolverhampton continue to look strong defensively but have lost some of the power going forward.

Wolves look stable enough to launch yet another pursuit of a top half spot.

Overall, Tottenham performed as a mid-table team last season and José Mourinho looked like he's lost some of his magic touch.

The Lilywhites have strengthened the squad but still lack that injection of quality that would propel them back into the race for the top spots.
However, Tottenham land European football yet again by claiming the FA Cup title.

Have lost goalkeeper Dean Hendersson but picked up Aaron Ramsdale from Bournemouth.

The Blades look solid enough to fight for another mid table finish.

Looking at shot on goals statistics and/or Expected goals (e.g. Experimental 361 or Infogol) Arsenal performed pretty much like a mid-table team last season.

Only two teams have seen a decline in the overall shots and xG data over the past two seasons, and Arsenal is one of those.

Arsenal enjoyed a fine second part of the season but still: only two teams have seen a decline in the overall shots and xG data over the past two seasons, and Arsenal is one of those. 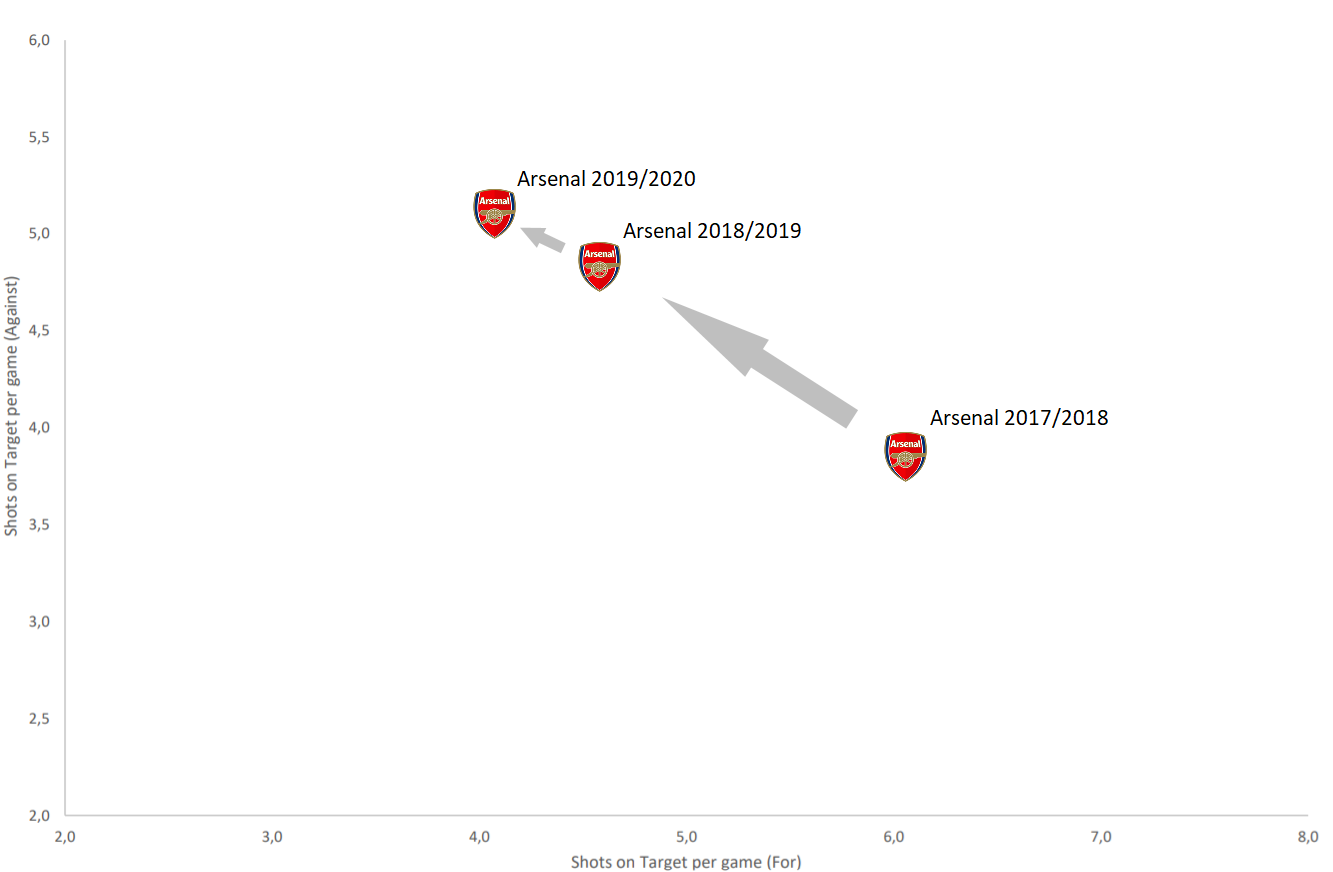 The Gunners have a large breach in the defensive lines. Magalhaes och Saliba might be part of the key to solving this and will probably fit Arteta's system better than most. However, both are still young and lack experience from the Premier League (Saliba only got 28 games in the French top flight under his belt). The defensive midfield remains an area of concern.

Betting tip: To Finish Outside The Top 6: Arsenal

Things doesn’t look bad at Everton, but something is missing. Maybe Carlo Ancelotti need a pre-season to get things right.

The Toffees hade more in them than the Premier League table showed last season. There's enough quality around for a top half spot, but right now I will settle for a place just below.

Performed pretty much like a mid-table team last season.

The Seagulls and Graham Potter have enough skill for a confident lower mid table finish.

Sean Dyche continues to work his magic with one of the least spectacular squads in the top flight. Performed pretty much like a mid-table team last season.

The Clarets look solid enough for yet another mid table finish.

Leeds were, by some margin, the best team in the Championship last season, conceding the fewest shots on target and goals in the second tier.

The Whites are, without doubt, the best promoted this time around and look strong enough for a lower mid table finish at least.

It's hard to tell where West Ham are going or wish to go. Performed pretty much like a mid-table team last season but have made up with bland manager David Moyes again.

The squad is basically the same as last season and I believe we can expect pretty much the same one more time: a spot just above the relegation zone.

Bottom of the table

The Birmingham outfit had a troubled first season back in the Premier League but survived in the end with a one point cushion.

The Lions have addressed the weakest spot and I think they will have just enough about them to do slightly better than last season.

Under Roy Hodgson, Crystal Palace have seen a decline in the overall shots and xG data for some time now.

The Eagles have bought attacking midfielder Eberechi Eze from Queens Park Rangers and that might just do the trick this time around.

I believe Newcastle had loads and loads of luck last season. They were among the teams creating the fewest shots on target and only rock bottom Norwich conceded more shots on target.

Have obtained midfielder Jeff Hendrick from Burnley and goalkeeper Mark Gillespie from Motherwell.

The Magpies try to play it safe but i think reality will come back to bite them this season.

West Brom have acquired attacking midfielder Matheus Pereira from Sporting Lisbon but apart from that the squad is more or less the same as last season. I just think the Baggies look too thin to survive in the top flight as of now.

Performance wise, Fulham trailed Leeds as well as West Brom and Brentford by quite some margin last season but showed great resilience. 8 teams conceded fewer shots on target than Fulham though!

Have nicked defender Antonee Robinson from Wigan and midfielder Mario Lemina (who played only limited minutes in Southampton and Galatasaray the two most recent seasons).

The Cottagers just look way too thin and are my favourites to finish rock bottom.

The Premier League is full of exciting history! Here's a reminder of last season, and a look back at all previous winners.

To Finish Outside The Top 6: Arsenal

Bet here
Get a $10 Sports Free Bet when you join with code SPORTS10, bet must have minimum odds of -200. See review for further details, and more promo codes.

Bet here
Players must claim bonus manually from within their account post log in, be at least 21 years old, and playing within the state of New Jersey.

Bet here
2 x $10 free bets will be available in your bet-slip as soon as you sign up. Deposit and place a first sports bet with cash, and if this bet loses, Unibet will refund you (up to $250) within 72 hours. New players only. Terms & Conditions apply. 21+